Solar cell is an alternative energy technology. used to replace solar energy to electric power To be used in various fields, solar cells were first invented in the year 1954, or about 65 years ago by 3 inventors, namely Chapin and Fuller and Pearson Solar cells are made of silicon that is doped, or a chemical process involving electrons. protons and nuclei until it becomes an en-type (N-Type) that has the property of being an electron carrier when receiving energy from sunlight and a P-Type that has the property of being an electron Receive electrons, the principle of working of solar cells. is a processDirectly convert light energy into electricity which relies on working through the photovoltaic phenomenon is to let the light come in and turn it into electricity by the work of solar cells or solar cells Must have 3 basic qualities

1. Absorb light to form electron-hole pairs. or exciton either

3. Extraction of the dissociation of those carriers to external circuits 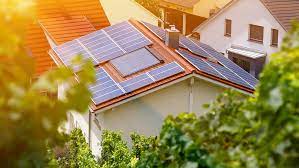